Beyond the Job Trance

Here’s Noam Chomsky with one of my current favorite interviewers, Curt Jaimungal diving deep into the most credible, contemporary Theories of Everything.

Have you discovered or learned something interesting or valuable here? Something that piqued your imagination, creativity, research, discovery, or other academic, philosophical, or spiritual interest? Let us know with ETH 0x1eb2d6E3f26fBBF31B485bbe3e316D6dAd806632, Cashtag $JustBePono, or Patreon. Every action we take in this multiverse, however small, matters and makes a difference. So, thank you and blessings, in this very moment!

Also, on wage slavery and the #JobTrance that we were once conditioned to accept; mostly by extreme and violent peer pressure; sociologicial, emotional, and even physical, for those who dare question conformity. Make no mistake about it, it’s violence.

Many Hawaiians call this crabs in a bucket behavior, but I can attest to its universality across Turtle Island. In short, others who found no creative way to break out of situations that they vocally lament, implicitly conspire to make sure nobody in their social circle is actually capable of, nor ever perceived as, having surpassed them in their own capitulation to a system that they despise. The cloak-n-dagger ways that this plays out in real life represent much of the worst, in the human predicament. This conditioned peer-reinforcement of enslaving norms is what literally makes people into Agents in the Matrix. It’s a mass sociological homicide; killing people’s optimism, imagination, and will, out of sheer rage and spite over what they feel they themselves lack. It’s ugly. And it’s utterly uncalled for, unnecessary. “Everybody has to be job,” and “Everyone has to pull their weight,” are toxic memes that abusive parents embedded into abused children, who then project those out upon everyone else. They are mere beliefs, however strongly held they may be. They are opinions, and nothing more. We know this, because there are billions of human beings who live happy lives of material sufficiency and even abundance, without holding to such beliefs, at all. Just not in America.

However, in addition to Millenials growing up with the internet, which has provided them a far more global perspective on the planet, as more Americans travel, more and more have caught on. The American system of abuses and abusers that creates such opulence for so few, while the vast majority live a kind of share-cropper’s life from which they will never escape, by design, has reached the end of it’s time on Earth. As Buckminster Fuller taught, we can cultivate a world that works for everyone, without economic or ecological disadvantage to anyone, so everyone can enjoy the whole Earth; and we’ve been getting that work done now, for more than half a century. We are beginning to reap what we have sown. Unconditional and unassailable gratitude, peace, abundance, sufficiency, for all. 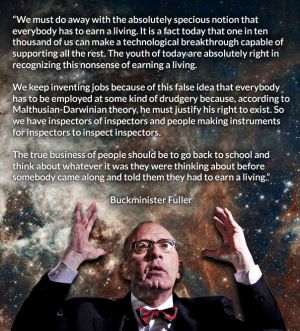 And it matters. Because today, underlying the many crises of hate in America – race, creed, gender, age – today is perhaps the most toxic root of hate of them all: the pandemic of self-hate. Self-hate an an unimaginable scale. Empty, direction-less, self-hatred that is sublimated, denied, and then projected onto notions of The Other, up to and including the grotesque reality of daily mass shootings in America, which, if unabated, threaten to catch up with suicide as a leading cause of death by utter despair.

And the Anchorage Daily news affirms that, “Shootings never stopped during the pandemic: 2020 was America’s deadliest year for gun violence in decades” (ADN).

These realities are still rapidly growing epidemics in post-pandemic American.

The question then becomes, what kind of economic and social organizations could have gotten away with this, for so long? What kind of economic and social systems could be left alone to _continue perpetuating such suffering up to this very day? What is this sytemic organizational name? Because whatever its name, its outcomes are now plainly manifest for all to see, and for all to decide whether or not such a system can be permitted to continue doing what it’s always done, effectively unquestioned and uncorrected, thereby giving us nothing but more and more of what we’ve always got.

Watch Chomsky on Terence McKenna, Sam Harris, GPT3, Cryptocurrencies, Kierkegaard, Neuralink, & Hofstadter if the embed below does not behave nicely.

Have you discovered or learned something interesting or valuable here? Something that piqued your imagination, creativity, research, discovery, or other academic, philosophical, or spiritual interest? Let us know with ETH 0x1eb2d6E3f26fBBF31B485bbe3e316D6dAd806632, Cashtag $JustBePono, or Patreon. Every action we take in this multiverse, however small, matters and makes a difference. So, thank you and blessings, in this very moment!